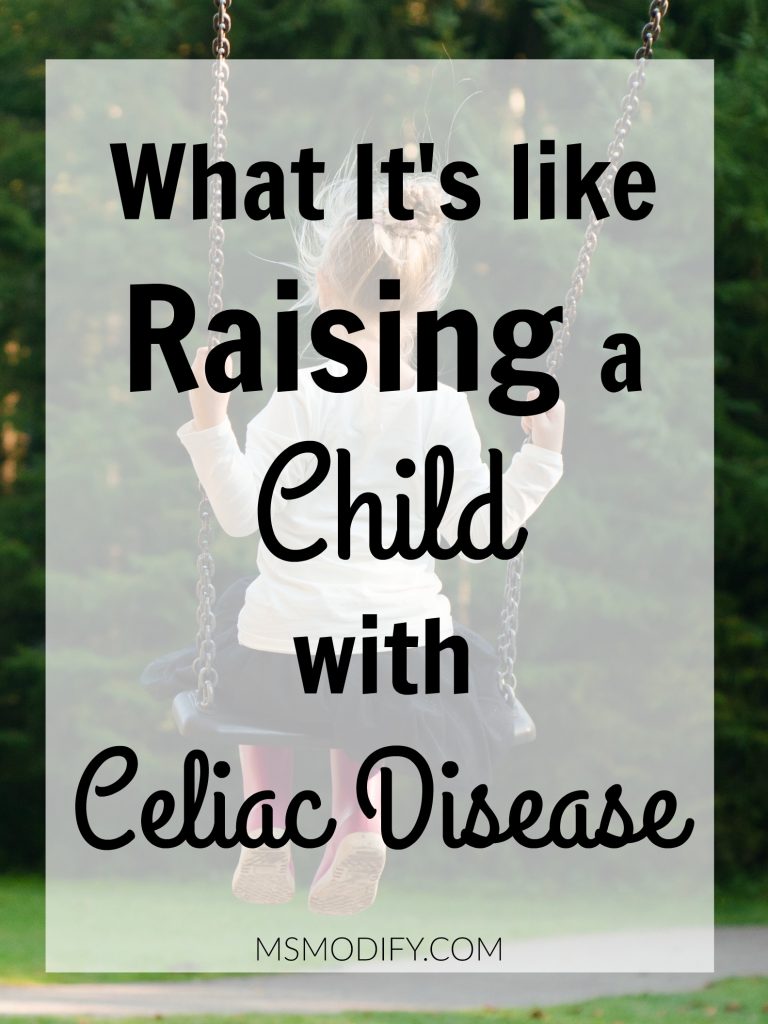 Living with someone diagnosed with a chronic illness impacts everyone involved. With celiac disease in particular, your whole life changes, everything from how food is stored in your house to plans you make. Last month I shared an interview I did with my husband about what it’s like being married to someone celiac disease. Today I wanted to share a different perspective;  a parent raising a child with celiac disease.

Marina is a single mom working full time as an RN and raising two children. Her daughter Grace, age 12, the younger of the two was diagnosed with celiac disease two years ago. Marina is my mom’s co-worker and it was after a casual conversation describing her daughter’s chronic stomach aches that my mom suggested she have her tested for celiac. Compounding an already difficult situation is the fact that Grace also has diabetes. Below I’ve asked Marina to share her experience raising a child with celiac disease.

When did you first suspect Grace had a problem?

We had no idea that Grace had celiac though she had chronic tummy aches at night when all the distractions of the day subsided. She was chronically constipated and the doctors were telling me to increase her fiber intake and reduce her stress. Nobody suspected it. In her school pictures she looked like she was pregnant. In spring of 4th grade she had a little blood in her stool. That’s when I called the pediatrician and asked for a stool culture. They found she had a parasite. She got a round of antibiotics, but didn’t cure it. That’s when I asked your mom and she told me to check for celiac. I asked the pediatrician and we did the blood test. Positive. Then we did a colonoscopy and endoscopy. She probably was sick for 2-3 years before she was diagnosed. From the blood in the stool till the colonoscopy and biopsy it took 2 1/2 months.

What were the symptoms?

How difficult was it getting a diagnosis?

It was very difficult before the episode of bloody stool. She probably had it for 2-3 years before the colonoscopy/endoscopy. Still, the pediatrician did not check for celiac until I asked for it.

It was very difficult to get a diagnosis. She didn’t have the typical diarrhea. Because she had constipation and not diarrhea the pediatrician didn’t think it was anything major, just lack of fiber in her diet! It wasn’t until I met your mom and told her about Grace’s situation that she rang the alarm and urged me to test her for celiac.

How did you feel when you heard Grace was diagnosed with celiac?

It was a very scary day. June 24, 2014. We had a colonoscopy and endoscopy at children’s hospital in LA. I will never forget that day. When the doctor came out of the procedure room it  was not clear to him what Grace had. The pictures he gave me to look at had big bleeding sores inside her in 3 spots and he said he wasn’t sure what it was; if he did it with his instruments or if they were there. So for about 3-4 days we didn’t know the exact biopsy results. They put her on anti-acids and strict lactose free and gluten free diet and told us to wait. When we finally got the results I was overwhelmed with the changes I had to make and I was afraid that I couldn’t do it. I felt sorry for my daughter that she would never be able to eat her favorite food again! It was a very sad time. A time of grief for the loss of health and the restrictions and the practical problems that arose from it.

How did you explain what celiac is to her?

I showed her  the pictures from the colonoscopy and endoscopy and the 3 lesions. I told her that a war was happening inside her tummy and the enemy was bread, pasta, and the fluffy stuff on doughnuts and orange chicken. That those foods were causing those wounds inside her. Later on I explained that her intestines have like little hands that grab on all the vitamins on the food we eat and put it inside her blood and that if she eats the bad stuff then those hands are going to grab the bad foods and put the juices inside her blood and then her blood will be all sick and she will feel very tired and with more headaches and tummy aches.

How did you educate yourself about celiac?

Initially I sent our diagnosis  to the Universities of Columbia and Chicago where there are established celiac programs. We got a box with GF coupons, the magazine “Eating GF”, a teddy bear, a bracelet with the Dx, a children’s book that talks about the disease, and a complementary book of Dr. Greene. I devoured the book and underlined all the important stuff. I was lucky to have your mom who told me about the cross-contamination, more than any doctor or book did. She told me the need to throw away all of my teflon pans and buy everything new. I didn’t listen at that point though… I learned the hard way 4 months later when Grace kept getting sick.

I also went to the celiac conference the last 2 years. I got a chance to stay in line and ask questions to the experts. I have to be my child’s biggest advocate and help fight for her health.

Also, I created a folder with sheet covers where I cut out product labels and stapled all the good- tasting brands. This way I remember which brands are GF and also so I can send my mom or babysitter to go grocery shopping for me by giving them the folder and they see the labels. This makes shopping faster and easier for us.

Did you feel that the medical community was well equipped to help you?

No, I do not think that the medical community was well equipped to help me. When I asked my primary doctor for a referral to a GI, the GI doctor had no idea about the risk of cross-contamination. He said “as long as she eats GF food she will be ok”. He never once mentioned cross-contamination.

What do you do to keep her life as “normal” as possible?

I cook all her meals at home and she always takes her lunch and snacks from home with her to school, and she sits in the cafeteria to eat with her friends.

As I’m doing this interview she is at her first sleepover for her friend’s birthday party. I asked the mom in advance what food they would be having at the party. She told me spaghetti, pizza and cupcakes. I did exactly the same at home and packed 2 lunch boxes. One for early evening and one for before bedtime (she is also diabetic type 1 and needs food or snacks if she is low from jumping around so much).

At home we all eat GF so she feels supported and that this is our normal too.

How has life changed since her diagnosis?

It has changed 100%. I used to enjoy baking and cooking and now I am dragging myself to do it. It’s as if the fun is gone. I still do cook daily but I do not enjoy it as before. It’s more strict and I have to calculate doses and carbohydrates (because of her diabetes) on top of it; it’s not fun. We miss getting take out and  the freedom of stopping and eating when you get hungry.

Is your entire kitchen gluten free? If not, how do you ensure cross-contamination does not occur?

YES. I have a 100% GF KITCHEN. I used to have non-GF snacks for my son that were packaged and sealed but Grace kept getting sick and I couldn’t figure it out. Well, when my son would clean up his lunchbox from all the crumbs and oils, he would use the kitchen sponge . I then used the same sponge to do the dishes or clean Grace’s lunch box. There you go…cross-contamination. The only thing that helped Grace not get sick is after I threw away ALL my kitchen mini-appliances and plates and silverware (I donated them) and went ahead and bought all new. Since then she does not get sick from my kitchen or what I cooked.

What’s been the biggest challenge?

The biggest challenge is avoiding of cross-contamination. And for me fatigue from cooking all 3 meals daily at home!

How did you teach her to be an advocate for herself when you’re not around?

Grace is still not able to advocate for her celiac disease or stand up to her dad when he cooks a meal for her in his mixed kitchen that he shares with 3 more men in his house. Grace takes her dad’s word when he says “it’s gluten free”. She still gets sick when she’s at his house. The problem is she’s uncomfortable to speak up. He cuts corners and forgets the cross-contamination risk. This is the only place Grace still gets sick when she goes.  I often pack her a lunchbox so she won’t eat at her dad’s home. Grace is not ready. I try to bring her in the kitchen to teach her to cook and bake GF but she is not thrilled about it. Hopefully as she gets older she will be able to this.

What’s your hope for the future for Grace and celiac as a whole?

MY WISH IS THEY FIND A CURE!!

What advice do you have for parents who need support in raising children with celiac or other illnesses?

Educate yourself on all the hidden symptoms and avoid cross-contamination. Send your child to celiac camp, so they can see they’re not alone. Join a celiac support group. Get connected with other parents and make sure you set up times for your kids to get together. This is hard on everyone so have support!

A big thank you to Marina for taking the time to do this interview! My hope is for other parents out there raising children with celiac or other chronic illnesses to know that you’re not alone!